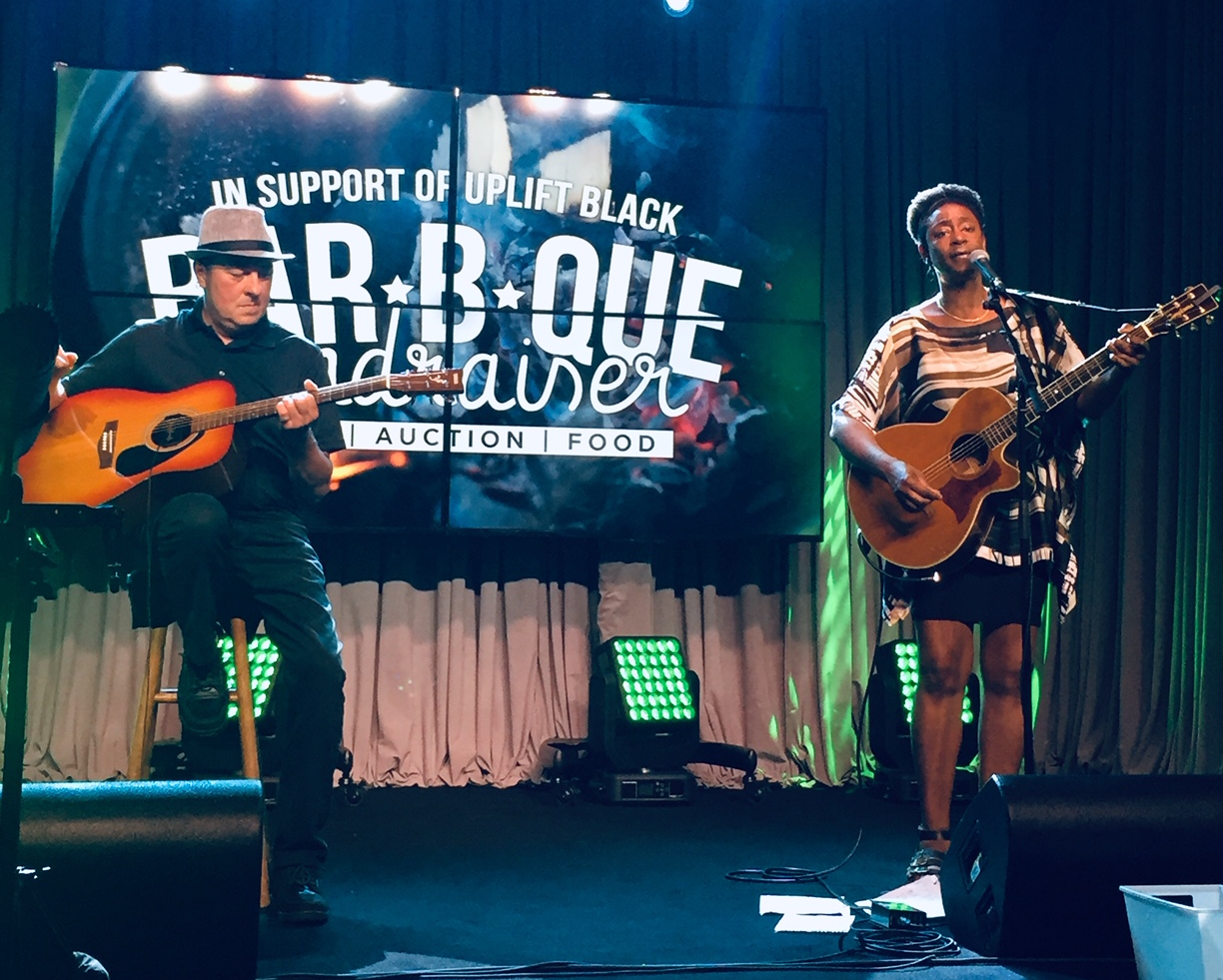 Singer/songwriter, Michelle Guy is the epitome of cool. She makes up half of the duo The Station and heads the Feelin’ Good Band. This talented vocalist and instrumentalist showed promise as a musician at an early age. Michelle and her family immigrated to Canada from the United Kingdom in the early 70s. The family settled in Scarborough where she played her first instrument – the xylophone. By the age of 7, Michelle knew that not only could she sing the melody, but realized she had the ability to sing harmony, as well. She fondly remembers singing the song, The Air I Breathe, and that the radio was always playing in the home where an eclectic mix was heard – everything from country to reggae.

Other instruments were added to Michelle’s musical repertoire during her primary and secondary education years, including the bass clarinet, piano, oboe and guitar. Her parents purchased the guitar from Sears (she still has it, by the way!) and it came with an instructional cassette and book. She managed to teach herself 3 chords. Her knowledge expanded in high school due to spending time with many of the other ‘artsy kids’ who attended her school. This group of young artists were jamming before they knew what jamming was. These ‘jam sessions’ would take place onstage in the school auditorium during the lunch period or after school. Michelle explained there were all types represented – the rockers, the conservatory types, the acoustic guitar/songwriter and poets. The students would meet to share their creations or knowledge of some aspect of music theory, and by the age of 16, she began to experiment with songwriting.

Michelle became outspoken regarding injustices in society which could be expressed through song, while in grade 11. She began to skip school to buy concert tickets and was invited to jam sessions held in peoples’ homes because they knew she could sing. After high school, Michelle explored the Toronto music scene and began to participate in Karaoke competitions. This Karaoke experience taught her the following, “When the song starts, there’s no stopping. Sing through the mistakes!”

An ad, in Now Magazine, caught Michelle’s eye. The ad was looking for members to join a cover band – which she did! Unfortunately, this didn’t work out, so Michelle and the keyboard player left, joined forces with a guitarist and formed their own band, The Perfect Third. This trio applied their unique stylings to covers and sang everything from Motown to Holly Cole. Unfortunately, they were told their music wasn’t ‘jazzy’ or ‘bluesy’ enough. Michelle was also told her voice wasn’t ‘black’ enough and because of this, the trio was not booked. Being resourceful and quite determined, she approached restaurants and bars she frequented, as well as places that didn’t normally have live music. Michelle sold the idea of ‘casual fine dining’ – the 5pm to 7pm crowd. The Perfect Third began to get bookings and were together one year.

Around the year 2000, Michelle learned to play the bass guitar, and Bonnie Raitt’s Something to Talk About was the first song she learned. Playing the bass made her recognizable. When she moved to Barrie in 2002, she played small weddings, house parties and corporate gigs. Again, she heard the statements, “You don’t have the true jazz sound”, “I was kind of taken back by the sound…I wasn’t

expecting that.”, or “You’re wonderful, but do you do any (insert the name of a black artist)?” Statements and questions such as these were and still are expressed by both white and black members of audiences. Michelle says she performs for those who can appreciate her music. Her goal is to find the venue where she fits. It is not her job to help others understand her sound, nor is it her job to provide counselling for others to find a way to accept the black female rocker.

When asked what message she would like to relay to Simcoe County, Michelle expressed the following:

“I would like to see the community that says it enjoys music, to support live music. Support artists financially. Support original music more. Show your appreciation for music with cash, especially now, while bars are scraping by to provide live entertainment for you. Also, stop looking at black artists and think they should sound a certain way. Embrace black folk music.”

Michelle hopes to present a concert of original music in 2022. Stay tuned!