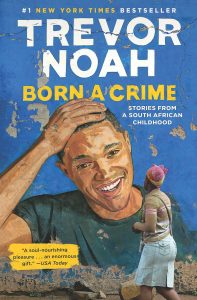 Hello, from the Book Club!

Welcome to the inaugural run of the UPlift Black Book Club! Every two months we will select a book of Black excellence to read as a community in an attempt to amplify and UPlift the Black Voice within Simcoe Muskoka. This month, we have chosen to read Born A Crime by Trevor Noah. Each run, we will send out two ‘check-ins’ (this one you are reading is the first one ever!) and host one virtual group discussion near the end of the two month period. This is subject to change as we get into the groove and decide how best to meet the diverse, but likely specific, needs of our club.

Thank you so much for coming on this journey with us! We can’t wait to see where it takes us!

The winners of our membership contest, winning a free copy of Born A Crime, are: Casey McNabb and Ginny Kaner

Congratulations! We will reach out to you to get the books into your hands!

*If you are having difficulty participating because the cost of the book club is inaccessible and you are a BIPOC member of Simcoe Muskoka, or if you would like to sponsor a book for someone who would like to join but for whom cost is a barrier, please email projectcoodinator@upliftblack.org or bookclub@upliftblack.org.

Reflections from an UPlift Black Member

Oh hey there! Courtney here, to write a little review about our Book Club’s first book Born A Crime by Trevor Noah! For those who don’t know me, I am the Director of Operations for UPlift Black.

Not sure where you all are with this book, I think we can all agree Trevor Noah is a brilliant storyteller. There’s always something to learn while listening to Trevor retell stories. I listened to the audio version of this book last year and haven’t shut up about it since! I may or may not have influenced this first book club selection.

If I was born in South Africa and not Canada, I too like Trevor would have been born a crime. I just turned 30 this year, let that sink in. Now I ask, how can a sweet innocent baby coming into this world already be guilty? Already be a criminal? A crime already committed? He couldn’t be seen with either parent in public. He’s own father had to run away from him. His mother had to pretend that she was a nanny or that she didn’t know him at all. He had to hide at his Gogo’s (grandmother) house; for fear that the police would come and take him. That’s a lot to put on a person, let alone a child. Always being careful, always being mindful, always aware of who may be watching. Thankfully in Trevor’s case it all worked out, he’s here now retelling his story.

There’s so much to learn and discover in this book, I’m so excited for this adventure you are on. I can’t wait to hear what you have to say about it later during our virtual meet up! Even if you have the book I’d highly recommend getting the audio version as well – to hear Trevor’s stories told with his own voice, is something to experience!

Why We Chose This Book

This book highlights the idea that no place on Earth is free of racism. We do not live in a post-racial society. Even if oppressive institutions such as chattel slavery and segregation are finished, their effects are still far reaching and widely felt. Apartheid was based partly on Canadian treatment of the populations Indigenous to the land. As we can see in the book, although apartheid ends quite early in Trevor’s life, the effects are pervasive throughout his life. Parallels between this and Canadian institutions are real, and the consequences that resulted from institutions such as Residential Schools, internment/concentration camps for Japanese Canadians, segregated schools, or chattel slavery, are felt today.

In order to continue your Trevor Noah binge (this book is, after all, a book about Trevor), we suggest this video to get you started. This is him speaking at the Goalkeepers Conference in 2017. Only Trevor Noah can tell you who he is, watch here.

1. Can you draw any parallels between Trevor Noah’s life and your own?

2. What surprises you about the formation of apartheid in South Africa?

3. What is different about the racial divide in Canada compared to in South Africa as described in the book?

4. What did you learn about religion and spirituality and its intersection with Blackness in South Africa?

5. Which parts of Trevor’s upbringing are surprising to you? Which fit with what you expected?

6. How is Trevor’s mother a symbol? What is she a symbol of (what does she represent)?

7. Apart from his mother, who do you think played the biggest role in the formation of Trevor’s life? Why?

8. What kinds of gender dynamics are at play in the book? What roles do men have compared to women? Are women and men free? Why?

9. Is there any evidence of gender or sexual diversity in the book or the stories that are told? If not, how might the inclusion of this information changed the book?

Something we found exciting was to see that a nation can have more than two official languages – 10 of South Africa’s official languages are indigenous to the area, out of the 35 indigenous languages there. Having your language represented by the people who make decisions for and about you is vital to quality of life.

When we draw similarities between South Africa and Canada as nation-states, we see far less inclusion of indigenous languages in a much larger state (we are looking directly at you, Canada). If so-called Canada encompasses an area that includes at least 50 distinct indigenous languages, why are there only 2 official languages? How could the Canadian system ever claim to be for the benefit of the Indigenous populations of this land. Actually, Residential School
instruction being in French and English only was something that helped the languages flourish across the nation.

How does that show up in Canada? The Canadian government prioritizes the health and well-being of French and English as languages – they are both mandatory in the school system. What is the reasoning behind excluding indigenous languages from protection rights that English and French speakers have?

For more thoughts on this issue and its impact on human lives, check out Media Indigena, specifically their article about the ‘lost and dying’ label for languages being misleading, here. They have an excellent resource page and a very informative podcast.

Coronavirus is highlighting racial disparities in South Africa that resulted as a side-effect of apartheid. In other words, the effects of apartheid in South Africa are still being felt today. Click here. We repeat; *we do not live in a post-racial society*

In the fight against apartheid, whose name comes to mind?

It would be hard to find someone who said anyone other than Nelson Mandela. But if you think critically about that – it HAD to be a group movement, right? So that means that Mandela was not the only actor. So who else helped abolish legal apartheid in South Africa? Any womxn (yes, obviously!!)?

Here is a fun article for you to read about some of the incredible womxn who were a part of the anti-apartheid movement.

Did you know that the language you speak shapes your understanding of the world around you?

Check out this article for more information here!

We can see how language shapes your understanding of the world. This means that learning a new language can expand your understanding and perspective to include new truths and realities you may have never considered. For example, did you know that in Ojibwe, there is one word, a verb, that means ‘it’s cold inside’? Dakate means ‘it (this room, house) is cold’. How incredibly concise, and fitting for Turtle Island. Another example is the many different words for
snow. As a culture who has only one word, if we were asked to sort snow into categories we may get two or three, but over 50? The Inuit have it down, and this means that they also have access to knowledge that we don’t have. They can be experts in their innate understanding of the world. There is knowledge built into language that cannot be conveyed in any other manner.

For some parallels and further understanding of apartheid, check out the titles District 9 and Kalushi on Netflix. Another Netflix treat, if you are looking for what life in South Africa might be like through the eyes of the media, take a look at Seriously Single, about two womxn, one recently single, living in South Africa.