On the 2nd anniversary of George Floyd’s death, President and founder of UPlift Black, Shelly Skinner still wants to know “Where has all the rage gone?” 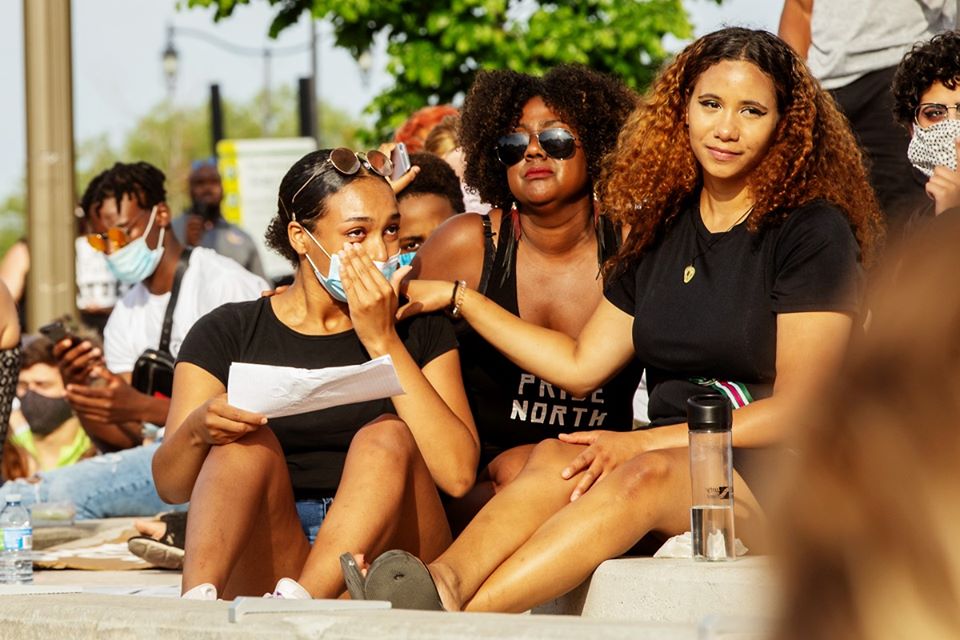 On the 2nd anniversary of the death of George Floyd, founder of UPlift Black, Shelly Skinner, reflects on the beginnings of the social justice equity organization.

“We are leading the way on what an equity organization should look like; we have leaders who appreciate and understand a lived Black experience and who work alongside allies who want to be part of the movement. Honestly, I learn every day from all the different voices at UPlift Black, and I’m a better person from listening to all of these experiences. We often find that there are so many similarities between what we’re experiencing, and the true difference, the only thing keeping us separate is white supremacy and an upholding of patriarchal systems. It has nothing to do with our sexuality or our skin colour or our gender. Those systems are the only things keeping us apart. We are humans.” -SS

Two years since our children were forced to watch helplessly for 8 minutes and 46 seconds as George Floyd was robbed of his life by then Minneapolis police officer D. Chauvin, as other officers prevented desperate onlookers from interfering to save Floyd’s life.

A white police officer held his knee to a Black man’s throat because he may have committed a crime. George Floyd cried out “I can’t breathe” and died calling for his mother.

Why did a police officer in 2020 kneel on a Black man’s throat in a crowded street? Why did he not listen when George Floyd said he could not breathe? How did this possibly happen in the first place?

It was outrageous in 2020 and, yet, it continues. Racist hate crimes, and the murder of Black people, are still happening.

More than two years into the pandemic the real plague is the white supremacy that infects every aspect of our society. It fuels Anti-Black racism and thrives in systems of oppression. Systems that continue to function today exactly the way they were intended to when they were developed. Systems that have people believe it is aggressive and radical to say “No more!” as they work to advocate and educate to dismantle hate.

Two years later, after the shock has worn off, Black Lives Still Matter. Are you still showing up?

The recent murder of Black people in a Buffalo Tops supermarket is the most recent reminder of all of the work that still needs to be done to fight back against white supremacy.

Have you spent the past two years dismantling systems of oppression as you promised to on that day in May 2020?

Shelly Skinner founded UPlift Black to do just that. UPlift Black’s anti-Black racism work is achieved through a commitment and actioning of their 4 pillars of service – advocacy, education, wellness, and professional development.

The day George Floyd was murdered Shelly Skinner already had so much going on, and she and her children were living in isolation and fear in an unprecedented lockdown.

By dinnertime, her kids had questions about the video of the police officer murdering the Black man in a crowded street. As she listened to them she couldn’t escape the thoughts of “You don’t need this, you don’t deserve this, and when is it going to stop?”

Shelly shared, “I’m sitting there reflecting on things I had done to code-switch, or make other people comfortable about my existence, and looking at my kids and listening to their stories. They were telling me things that I had no idea were happening, things they had not shared previously because “‘it just happens all the time mom”. My son shared, “This is just the way it is, this is just how I feel.” And I thought “No, no more, you cannot make this a normal existence for us, we’re not going to allow it anymore.” As a mom, I had to do something, but I was hesitant about what that looked like, to put myself back out there after being treated so wrongly.”

Shelly has been an activist for over 15 years. Her influence has resonated in communities across Ontario and Canada. Heading into the initial wave of the pandemic she took a much-needed step back from local activism to protect her mental health. . No matter how progressive communities claimed to be, Shelly experienced anti-Black racism at every turn. She remembers a conversation she had, where she was forced to wonder “Am I ever going to be able to do anything where I am not harmed and discriminated against, just for existing as I am, Black queer woman?”

On the day of the rally held at Barrie’s Meridian place in response to George Floyd’s murder, Shelly was not formally invited to speak or participate. She shared she attended because she had to.

Shelly shared, “I went because I’m a Black woman and this is an important day. But also, I was curious, super curious. Who would come? Who would show up? I had attended all kinds of rallies and was involved in creating so many different types of [in memoriam] ceremonies. I was always aware of who shows up-who was consistently there, and also, who was consistently not.”

When Shelly arrived, even though she was not asked to participate, and had no speech prepared, she was asked if she was speaking. She did not know if she would speak, but she took in everything and remained in the moment. Every speaker was looking at her, their faces asking if she was ready. When she did choose to speak, Shelly reflects, “It wasn’t just words. I was fully taking in what I was witnessing, in that moment.”

Shelly got up on the Meridian stage and asked “‘Where were you? I see you now, but I also know performance… I know what performative allyship looks like. And, I know from experience, that all the people who said they were going to do better never did. So now I want to know: Where are the allies who said they were going to be here in support of Black lives, and where have you been?”

This question remains vital today. UPlift Black is a social impact agency born out of George Floyd’s murder, and the much-needed donations on which the organization relies, along with its pool of volunteers are nowhere near what is needed to do the important work they do.

Shelly shares, “It’s been so inspiring to see the UPlifters who have stepped in, and all the ways they have contributed in less than two years. It’s been a beautiful thing to witness. As we’ve navigated this work, we learn more and more every day how much more we are needed. There are consistently more things that need doing, and not enough people to do them, and that is our reality right now. “

Shelly shared that funding is extremely low and that donations are not happening on a regular basis. She is curious about the hesitation. When UPlift Black does get donations it tends to follow an incident, and that is precisely the performative behavior that UPlift Black is trying to encourage the community to move away from.

So, as you reflect on the anniversary of George Floyd’s murder and the ongoing harm happening to Black, Brown, and Indigenous people all over North America, please consider activating your allyship and donating to UPlift Black. You can contribute a one-time donation or join UPlift Black’s Legacy Donor program. Help this small but mighty organization fight racism and inequity in our community. To donate visit upliftblack.org/support.

Still more to come as we interview more UPlifters as they share their journey with the social justice equity organization based in Simcoe County.

Over the coming weeks, we at UPlift Black are hard at work preparing to re-launch upliftblack.org. Check back for updated content, including more from the interview with UPlift founder and president Shelly Skinner.